Posted on May 8, 2011 | 2 Comments
Writing a book takes a ton of work. But it also provides opportunities to meet people and see places one might not otherwise encounter. Last week I had one of those opportunities.

It all started five years ago, almost to the day. I was meeting Lee Sandweiss, then-sponsoring editor of regional publications at the Indiana University Press, to discuss the contract for a book she’d invited me to write.  After taking care of business, I mentioned another book I’d long dreamed of doing; it would be about women who’d formed passionate relationships with their homes while living without a partner. “If you ever do that book, you have to include my friend Clara Gabriel,” she insisted. “She has one of the most beautiful homes I’ve seen in my life.”

Four years later, with A Home of Her Own under contract (thanks to current sponsoring editor Linda Oblack) and a collaborative partnership forged with photographer Kendall Reeves, I got to meet Clara and see that amazing home in Chicago’s Lincoln Park.  In creating her home, Clara had worked with a couple of extraordinary professionals—architect Kathryn Quinn and designer Jean Alan. Jean’s touch was especially visible that day, as she had filled the house with fresh flowers for our photo shoot.

Just as we were leaving, Jean herself showed up. There were still a few spots left in the book, and I asked whether she could suggest someone with an interesting story. “How about me?” she responded. You’ll find Jean’s story in Chapter 15.

In the course of our interview for her story, Jean mentioned a favorite haunt from her youth—a place so compelling that it had a profound impact on her life. She mentioned names I’d never heard of—“Edgar Miller” and “Burton Place.” I dutifully wrote them down. Later, while doing background research for her story, I googled “Edgar Miller and Burton Place” and began to understand.

During high school in the late-1950s, Jean and her friends discovered a warren of buildings in Chicago’s Old Town. Behind a wrought-iron gate (which was, happily, never locked) was a world unlike anything she had known.

On secret visits after dark, the girls would wander the brick and tile paths to breathtaking discoveries—pocket-sized courtyards draped with vines, outdoor stairways leading up to doors carved with gazelles and monkeys, a tiled pond swimming with goldfish. Peering through windows into lighted rooms, they marveled at soaring plaster ceilings, windows of stained glass, stairs encrusted in handmade tile. 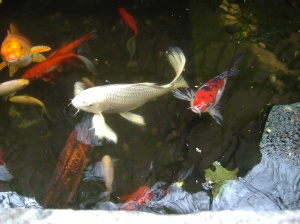 Like many of her peers, Jean married young and had children. But while her two daughters were still little, she and her husband divorced, launching Jean into a period of self discovery that left her determined to fulfill her creative potential. Through a combination of natural talent and rock-solid resolve (key to countless cold calls in search of work), she was hired to design commercials and later worked on films. Once her foot was in the door, there was no stopping her.

Jean spent 20 years as a motion picture set decorator, working on such high-profile productions as Blues Brothers, About Last Night, and The Untouchables. Then in 1994, in partnership with her younger daughter, Ruthie, she opened her own interior design business.

Over the years, Jean had learned all she could about the maze of studios in Old Town that had proved so inspiring when she was 16. The place had been the creation of artist Edgar Miller and real estate developer Sol Kogen, whose travels in Europe had clearly influenced the design. She even discovered a couple of indirect personal connections to the property: three of the original studios had been purchased and remodeled by the former husband of a client, and Kathryn Quinn had been the architect on that project. Yet for more than 50 years, Jean had never set foot inside.

Last week, Jean got her chance. Clara and I were there to share her wonder. 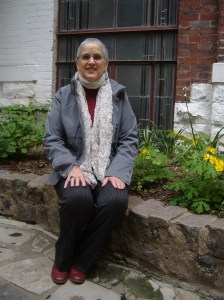 Jean in the courtyard

Jean in the courtyard

Take your own tour at any of the websites that follow.

Richard Cahan’s book, Edgar Miller and the Handmade Home, with photography by Alexander Vertikoff (CityFiles Press, 2009), is well worth the $50 list price.